Halifax – Today, NDP Leader Gary Burrill spoke with Mike Sangster about the consequences real people will face if either Iain Rankin or Tim Houston get the chance to eliminate rent control.

“If given the chance both the Rankin Liberals and the Houston Conservatives will eliminate rent control leaving real people at the mercy of skyrocketing and unfair rent increases,” said Burrill. “A recent report says that Halifax is short 25,000 housing units. If people are being priced out of their current homes and don’t have an affordable place to move, where do they go? That is a question the Liberals and Conservatives have refused to answer during this election campaign.”

A letter sent to Sangster from his property management company informed him of a rent increase of $850 per month. It states, “However, should any temporary rent control orders still be in place on September 1, 2021 your rent will increase by the percentage allowed until the order is rescinded. At that time, the rent will increase as above on the first day of the following month.”

“This all feels very unfair and has caused me a lot of stress and anxiety,” said Sangster. “This is a huge increase and it’s like this huge weight just hanging over us and will hit us the moment the temporary rent control is eliminated. There are no affordable vacancies, where are we supposed to live?”

Major cities like Toronto, Montreal, and Vancouver have rent control.

“The current housing crisis exploded under Iain Rankin and the Liberals,” said Burrill. “People shouldn’t live in fear of getting a letter like Mike did. These unreasonable and sudden increases aren’t fair. This election the NDP is offering a better path, one where people can afford to stay and live in their homes, one where affordable housing is available to those who need it. Permanent rent control is a key first step in dealing with the housing crisis. It will only happen by electing more NDP MLAs.”

“This election there is a choice -- the Liberals and Conservatives, who will eliminate rent control leaving seniors, families, and young people vulnerable to being priced out of their own homes and without a place to live, or the NDP,” said Burrill. “Your vote will make a real difference in the lives of people like Mike. The Liberals have been hiding their leader. The Tories have hidden their platform. The NDP is dedicated to immediate action on rent control. We aren't hiding our commitment to making life better for you. On August 17, vote NDP.” 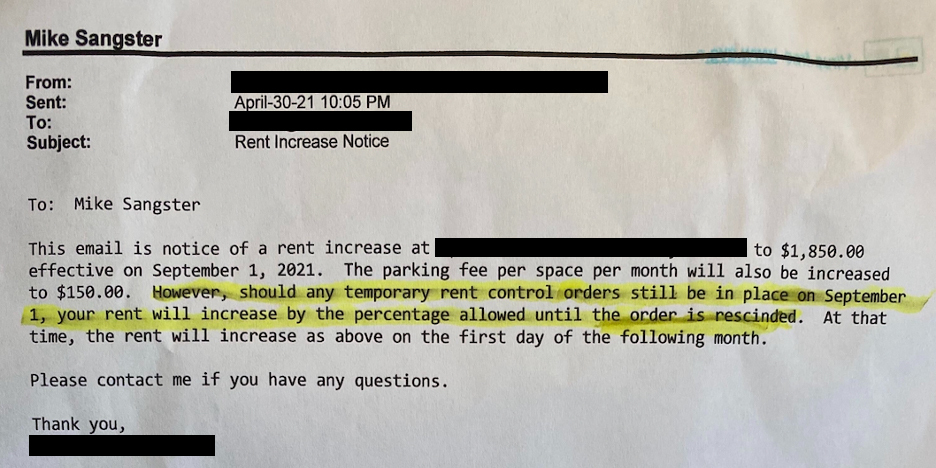